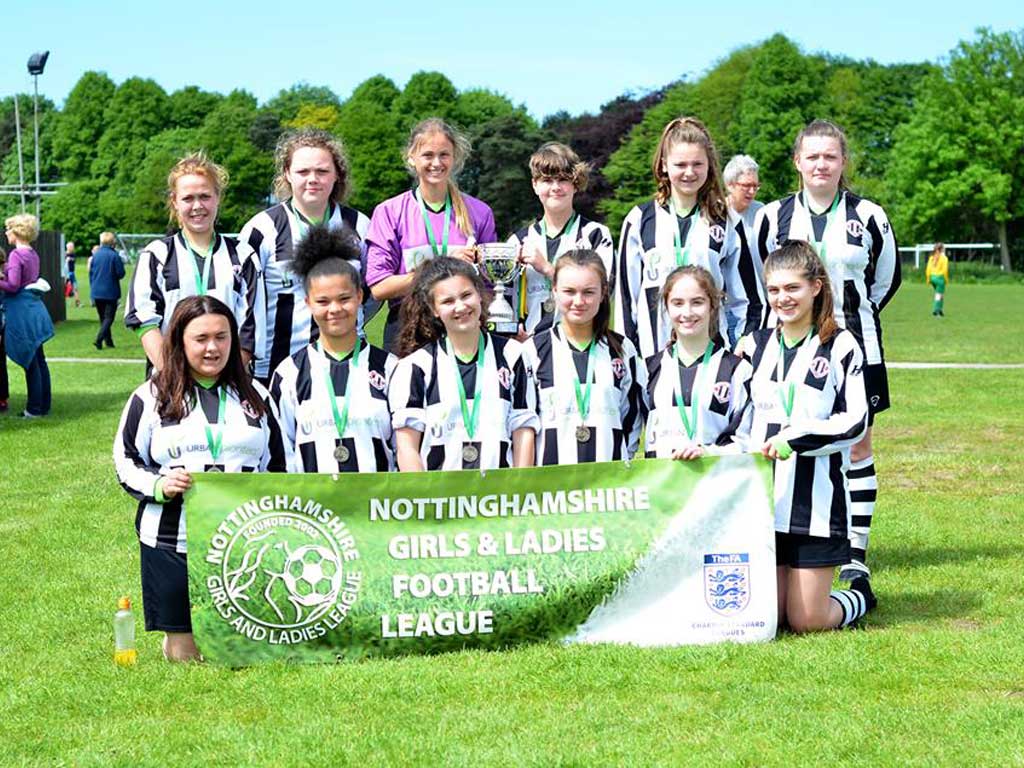 After 9 years together and 8 seasons playing in the Notts Girls & Ladies League, Southwell City U16 Girls have played their final game.  And what a game it was!

On Sunday 13th May the team played in the Notts Girls & Ladies League Cup Final at Calverton Miners Welfare.  After a league campaign that saw the team finish in joint fourth with Mickleover Sports all our hopes were riding on our final game of the season against Sandiacre Town.  After a tough route in to the final which included a 5-1 win over Nottingham Forest Ladies, a 3-0 win over Sherwood Youth and a semi final v Bingham Town which went to penalties, we were all set for our big day.  As league runners up, Sandiacre were always going to be hard opposition to beat.  In fact Sandiacre were a team we had never beaten in any league campaign and they themselves were only beaten once during the season by the eventual league winners.  I have to say, much of the day passed in a blur of joy.  We scored two brilliant goals in the first half, thanks to Chante Dixon and Jessica Wright, to leave Sandiacre reeling.  After half time Sandiacre came out fighting and we found ourselves pegged in our own half for much of the second half.  With a superb performance by our defence and keeper, Rachael Alvey, we managed to hold off Sandiacre for long periods of time.  Sandiacre eventually scored after some relentless attacking but a supreme effort from all the Southwell players saw us finish as 2-1 winners when the final whistle was blown.  It really was a fitting end to the team’s final game.

With a small squad of 12 players playing 11-a-side football the decision was made to fold the team at the end of the 2017/18 season.  A lot of the girls will continue to play football either with our own Southwell City Ladies team or other local teams.  Working with the team over the seasons has been an absolute pleasure and extremely rewarding.  I wish them all the best on their future football endeavours.

The team formed many years ago as a result of Southwell City’s successful girls recruitment program.  Southwell City coaches, who are all DBS checked, FA qualified and first aid trained, go in to local schools during the summer term and run after school taster sessions.  This culminates in a Girls Inter School Tournament held on the Memorial Ground in Southwell where the girls get to experience playing in a team under match conditions with referees.  The success of this program has seen Southwell City have girls teams from U9 to Ladies playing in the Notts Girls and Ladies League.  Should you be interested in joining a team please contact our Girls Development Officer Sven Richards at [email protected] or 07818 374 336.